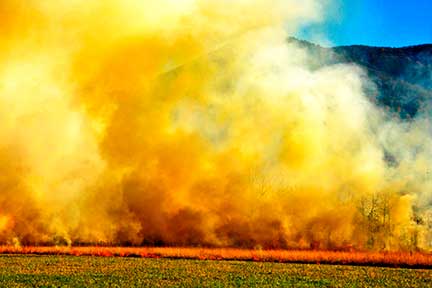 "Every act of creation is first an act of destruction."
Pablo Picasso


The park service has decided to allow the grasses in Cades Cove to revert
to the original grass that covered this area many years ago.
So, they are burning off the "modern" grasses.
So, when this long strip was set ablaze, we made it a point to be on hand.
I was allowed fairly close to the fire.
Close enough to really feel the heat from the blaze.


It was an absolutely unforgettable experience. We were
privileged to be a part of it.
I will be posting more photos from this as I get them processed.

Welcome to Steve Carl's blog. We will try to update this site frequently with images, field notes, and thoughts from Steve.
You may click on any of the images to view them at a larger size but please respect Steve's © work and do not use the images without permission.

Just so you know: All the material both text and photos on this blog are copyright (c) Stephen J Carl 2008 -2022.
Please respect Steve's work and ask for permission.
I hope that you enjoy my blog.
Your thoughts and comments are welcome.